Could Bubba Watson make it a hat-trick of green jackets in 2018? The way he’s playing this year you wouldn’t bet against it.

Some bookies have slashed his odds to 12/1 but you could have got well over 50’s at the start of the year.

Bubba is a loyal Ping staffer and has enjoyed all his 11 PGA Tour wins with the brand’s clubs.

His latest at the WGC Matchplay came after beating world number two Justin Thomas in the semi-final before crushing Kevin Kisner 7&6 in the final.

His next club with a headcover is a 19˚ Ping G hybrid.

We have seen Bubba playing the iBlade irons but he’s still using the S55 model – which he won his second green jacket with – with the exception of an iBlade 2-iron.

He has three Ping Glide 2.0 wedges and uses a Ping Anser putter.

Bubba switched to a Volvik ball last year where we saw him using both pink and green models but has now gone back to the Titleist Pro V1x which he won his two majors with.

The American was 117th in the world rankings at the start of the year and is now back in the top 30. 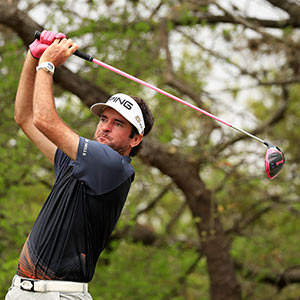