TaylorMade Golf has entered 2018 on the front foot with the release of its M3 & M4 metalwoods, which are highlighted by the company’s breakthrough innovation – Twist Face technology.

“From the creation of the first metalwood in 1979, TaylorMade has established a legacy of breaking from tradition to reach new thresholds of performance. In 2018, we have once again uncovered a new frontier of driving potential with Twist Face Technology — a radical departure from traditional driver-face design, engineered to correct for inherent human swing tendencies in real-time, giving golfers a tangible competitive advantage,” explains Brian Bazzel, Vice President, Product Creation.

Reimagining traditional driver face design, TaylorMade’s Twist Face technology is truly the first of its kind. Twist Face, featured in both the new M3 & M4 drivers, is TaylorMade’s solution to counteract golfers’ most common misses, specifically, those resulting from the high toe and low heel impacts.

To counteract a hook, the driver face has been ‘twisted’ open (loft increased & face opened) on the high-toe to help straighten golf ball flight. Similarly, to counteract the slice, the driver face has been twisted closed to de-loft and close the face in the low heel area. Ultimately, TaylorMade’s Twist Face technology delivers a corrective face angle when hit off-centre for longer, straighter shots.

Exclusive to the M3 in both the 460cc & 440cc models is a new intuitive Y-Track adjustability system that allows for CG adjustment of the head to obtain desired, optimal golf ball flight parameters. The heel to toe track and front to back track on the M3 are connected, allowing all 22 grams (two 11g weights) of moveable mass to be utilised for both the benefit of heel to toe control as well as front to back CG adjustment. The Y-track gives the golfer more precise CG adjustability than ever before with more than 1,000 unique CG configurations — more than double the number of positions in the 2017 M1. Add in TaylorMade’s 12 position, 4-degree ultra-lightweight aluminum Loft Sleeve (back sleeve compatible) and the result is an unparalleled level of personalisation.

The flat curvature of the front/back track provides the lowest CG possible regardless of the weight setting. In fact, when the weight is in the back position versus M1 2017, the 2018 M3 CG is 36% further back. This makes the moment of inertia (MOI) 10% larger without raising the CG projection on the face. Furthermore engineers were able to increase the total amount of front / back CG movement by 83%.

For the first time ever, TaylorMade has engineered a slot housed in the sole of our most adjustable driver. The new Hammerhead slot was engineered to work in combination with Twist Face and Inverted Cone technologies to deliver maximum ball speed across a larger area of the face and thus, resulting in a larger sweet spot. The Hammerhead slot’s design is defined by three design elements; the central Speed Pocket™, the face geometry and the stiffening ribs.

By dividing the Speed Pocket into zones, TaylorMade was able to increase its overall length from 82mm to 100mm — a 22% increase. Additionally, it allowed for the creation of a larger flexible centre zone, designed to increase ball speed on low face impacts and drop unwanted backspin. By using the new ribs, engineers were able to decrease the thickness and weight of the face allowing for a more flexible face designed to deliver higher ballspeeds across a larger area of the face. Engineers challenged themselves to evolve the construction and performance of the Speed Pocket; their answer was Hammerhead, a radical technology engineered to deliver longer drives.

The ’17 M1 fairway broke innovation and performance barriers by being both adjustable and incredibly long, a goal the engineering team set in the conception stage and executed in its creation. The new M3 fairway takes a premium, adjustable fairway to the next level; constructed with a 450 stainless steel body, strong Ni-Co C300 face and new, thinner 5-layer carbon composite crown (same as the M3 & M4 drivers). An improved track system that houses more moveable weight (29 grams compared to 25 in the ’17 M1 fairway) allows for the adjustment for preferred shot shape; from fade to draw, more than ever before.

Similar to the M3 driver, the M3 fairway also utilises an ultra-thin, ultra-light crown and sole panel. The combination of the composite panels saves up to 8g over a similarly shaped metal fairway. The discretionary weight is placed low and forward into the M3’s clubhead to create driver-like launch conditions (high launch & low spin).

The sliding weight track (SWT) on the M3 fairway, first introduced in a TaylorMade fairway with last year’s M1, incorporates a new, smaller Loft Sleeve screw, which allowed for the moveable weight track to move 3.5mm forward, which resulted in the CG moving almost a full millimetre forward too, an 8% change over the ’17 M1.

The new M3 Rescue incorporates a moderate sized, Tour-proven and preferred shape first introduced by the ’17 M1 Rescue but with more moveable weight — 30g compared to 27— and a successful sole design that will appeal to players of all ability levels. The crown showcases a whole new look with a premium two tone, matte silver front section and gloss black back body framing the ball beautifully. The sole is engineered with a performance-driven adjustable sliding weight system, allowing golfers the opportunity to not only experience the neutral/fade biases of its predecessor but having more moveable weight for an unparalleled level of personalisation in a TaylorMade Rescue.

In addition to the new 30g sliding weight and advanced sole design, the head comes equipped with a 3-degree ultra-lightweight aluminum Loft Sleeve. Premium components again are offered as stock options, with a MCA Tensei Blue hybrid 80g shaft in R, S & X flexes as well as a 70g A flex along with a new Lamkin UTx cord grip.

Complementing the M3 driver and its unrivaled personalisation is the M4 driver, which differentiates its design by putting an emphasis on unparalleled forgiveness with straight distance. The M4 driver not only utilises TaylorMade’s most groundbreaking ‘18 technologies (Twist Face & Hammerhead), it also incorporates Geocoustic™ engineering – combines geometry and acoustical engineering to unlock more forgiveness and best-in-class sound.

In the M4 fairway, TaylorMade’s ultimate distance fairway has been made even more forgiving, taking everything learned from the use of multi-material composition, Speed Pocket, Geocoustic Technology and ICT integration to deliver a remarkably high-performing complement to the M4 driver that delivers maximum distance and forgiveness by way of a larger sweet spot and more optimal launch conditions. A new split-weight mass pad separates the weight at the outward extremities of the head to preserve ballspeed on shots hit off-centre.

Completing the M4 metalwood lineup in 2018 is the M4 Rescue. Power and control are the essential ingredients golfers need when playing a hybrid. M4 offers the best of all worlds with key performance technologies working in sync to produce exceptional ball speed and a larger sweet spot for enhanced overall playability.

The low-profile body of the M4 Rescue has a tiered two-tone crown with the same matte silver front and gloss black rear section that showcases the distinctive, widely recognised aesthetics TaylorMade’s M series of product has become known for. The M4 Rescue features a cut-through Speed Pocket to increase launch and maximize ballspeed on shots hit below center face. Similar to the M4 fairway, a new split-weight mass pad separates the weight at the outward extremities of the head to increase the club’s forgiveness by preserving ballspeed on shots hit off-centre. In addition to the added forgiveness, a Geocoustic sole design and a short, fluted hosel work in tandem to optimize sound and feel at impact. The M4 Rescue is designed to help average golfers replace a long iron with higher, longer and more draw-biased performance. 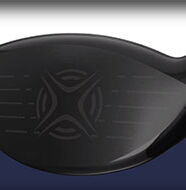 Speed has just been ramped up a notch. The new Callaway Golf XR Driver has landed!

TaylorMade Golf has created a new copper style which is sure to impress golfers up and down the country as the TP Black Copper Juno SuperStroke Putter hits American Golf stores.