Si Woo Kim’s 2017 season had so far thrown up seven missed cuts and four withdrawals from 18 starts. He is now the Players champion and the youngest in the championship’s history, eclipsing Adam Scott’s previous best at Sawgrass by nearly two years.

The 21-year-old, who broke his duck at last year’s Wyndham by five shots, produced a magnificent display of short and long-game skills to win by three from Ian Poulter and Louis Oosthuizen.

Over the back nine the Korean got up and down at 10, 11 and 14 with a variety of brilliant chips and bunker escapes and, otherwise, he rarely put himself in any trouble. At the 17th, with a two-shot lead and an ominous record of 7/7 greens hit from his previous visits to the signature hole, he found the back of the putting surface and coolly rolled it down to 18 inches. 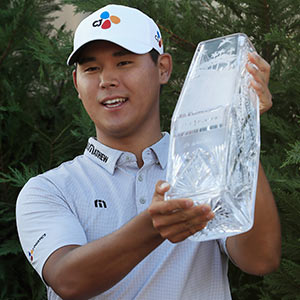 Then at the last he hugged the left-hand side, no bailing out to the right, before another up-and-down, this time with a fairway wood, to sign for a sublime 69.

His closest pursuers were Poulter and Oosthuizen and they eventually both had to settle for second. For Poulter it completed a remarkable turnaround of his season and his one-under 71, saved by a quite brilliant up-and-down from the trees (following, whisper it gently, a shank) at the 18th which almost found the bottom of the cup.

The Englishman picked up three shots in his first 11 holes to give himself a real chance but then dropped his first shot for 40 holes at the reachable 12th and was unable to make any more inroads. The highlight of Oosthuizen’s round was an eagle at the 11th.

Rafa Cabrera-Bello’s day was very unremarkable when he reached the 16th fairway but then, for the first time in the Championship’s history, he holed out for an albatross with an 8-iron courtesy of a kick forward off a bank and a huge slice of luck. He then almost lost the 8-iron as his jubilant throw ended up in the water. Minutes later the Spaniard knocked his tee shot in to a few feet at the 17th for a two and he finished things off with a putt for par from off the green after an horrific hook into the water off the tee.

Three holes, eight shots. And 10 better than the defending champion Jason Day who closed out his week 9-5-4.

Joint overnight leader JB Holmes finished 8-6 himself for a disastrous 86 to slip 40 spots while his playing partner Kyle Stanley could have tied for second after his fourth birdie of the week at the 17th but his birdie putt at 18 stayed out.