Getting inside the head of Ian Poulter

Mark Townsend recalls how Ian Poulter deals with the occasional shank and why we should all be grateful that his star is back on the ascendancy...

“My ideal start to a round would be a bogey to take away the pressure of a par or, worse still, birdie.”

“This sounds a bit alien to you doesn’t it?”

Ian Poulter regathers his composure and gives his considered answer…

“That is utter lunacy, I’ve never heard anything so ridiculous in all my life…”

“I know,” I reply, barely audibly.

“You are there to try and birdie every single hole on the course. That is it in a nutshell.” 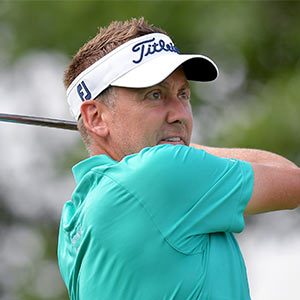 Less than 24 hours before Poulter was 350 miles away almost winning the 2013 Open Championship at Muirfield. He had driven down to a junior day that he was hosting at Woburn, had slept for “maybe a couple of hours” and was now answering odd questions from me having sent all the youngsters off from 9am.

I had 10 minutes with Poulter and it was comfortably the best-value period of time I have ever spent with a golfer. He gets it. Those who aren’t a fan will point out that he’s fame hungry, self-promoting and full of himself, all of which might be true, but when you sit down with him he turns it on.

I had first met Poulter at an event called Golf Live at Stoke Park where he had fans of, worryingly, all ages queuing round the block of his clothing stand to get a picture and an autograph. House music was playing, Poulter was bouncing from one foot to the other and, given it was just that, a signature and photo, everyone was having the time of their lives.

One of his PR aides turned to me and, barely containing her excitement, blurted out: “Oh my god, he’s got such charisma!”

By this point I had decided that Poulter was about as far removed from me as a human being as was possible.

“Yeah, he’s amazing,” I heard myself say, which convinced neither of us. By the time I’d left Stoke Park I actually did think he was amazing. This time there was 15 minutes before he was due to give a driving clinic to a bunch of eager punters and, quickly coming down from the high of being the Pied Piper of the whole event, the one-time assistant pro churned out his favourite memories of St Andrews for an Open preview. I would prompt him and he would talk and talk. Like I say, he just gets it. Poulter is now 41 and he’s big box office again. The 16-time winning pro, voted as recently as two years ago in a Sports Illustrated poll as the most overrated player in the game, along with Rickie Fowler, was second at Sawgrass last week in what was arguably his best stroke play finish – his sole win in the States came in the WGC-Match Play.

A few weeks ago he thought he was off the PGA Tour, a year ago many thought a foot injury would slowly precede the winding down of a careerthat, while not hitting the heights of jousting with Tiger Woods for the top spot in the world as was once promised, has delivered so much.

He’s the Postman remember, that’s what he does.

I once asked Lee Westwood who, out of everyone he has played alongside, was the most confident player he had ever come across.

Quick as a flash, and with wry smile, he replied: “Poulter, without a doubt.”

You wonder if Poulter’s head was on Westwood’s shoulders it wouldn’t be if but how many majors he would have by now, maybe the same could be said for Luke Donald or Paul Casey or anyone else in that group of players yet to lift one of golf’s four biggest prizes.

In a game of clone-like behaviour, on and off the course, Poulter is a one-off. It’s not pretty or overly natural but he gets it done and, what’s equally as appealing to all of us who struggle with the same sport on a weekly basis, there is a kink in there which pops up every now and then in the form of a hosel rocket.

I personally can’t watch Poulter hit an iron shot without wincing inwardly as the club approaches the ball. At Sawgrass the shank re-emerged at the 72nd hole, in front of thousands on the property and millions at home, and he ended up taking a drop from some foliage. He then produced one of the shots of the year, almost holing out from a spot that no professional had ever played from.

With the time ticking towards the 10th minute at Woburn I asked Poulter about his shanks – ever the consummate professional I left the question to the end in case things got a bit awkward.

“Every shot: full visuals. Drives, chips, putts, the whole lot. I pick a finishing distance and then a starting line so I visualise where I want the ball to land and a line right off the club face.”

“What if you have just hit a shank?”

“It doesn’t bother me. It is irrelevant. It is so close to the sweet spot that you shouldn’t change what you are already doing. Most people try and compensate and they hit another one. Their process after the first one isn’t good.”

I remind him of the time he once hit a couple in a round at the Masters and ask how much it played on his mind.

“It didn’t, it’s gone, it’s irrelevant. I had one at the 4th off the tee and one with my approach to the 15th where I was way out to the right and then still nearly made birdie.”