How Jason day went from nearly man to Major Champion 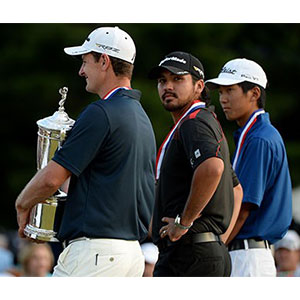 Jason Day burst on to the scene as a 22-year-old when he finished in a tie for 10th at the 2010 PGA Championship.

Five years and eight top 10 finishes in Majors later, Day would return to Whistling Straits to land the prize that had agonisingly alluded him for so long.

Day is only 27 now but you still get the the feeling this win has been far too long in coming.

He can take comfort from the fact five-time Major champ Phil Mickelson didn’t win his first until he was 33.

Day landed his first PGA Tour win at the Byron Nelson in May 2010 but I have to be honest and say my first real recollections of the Queenslander came in the 2011 Masters.

He and countryman Adam Scott put a charge on the back nine at Augusta but Charl Schwartzel birdied the final four holes to take the Green Jacket.

Even back then you could see Day’s fighting qualities and sensed he felt at home on the Major scene.

A second place followed in the US Open but after finishing eight shots behind Rory McIlroy it was the sort of tournament where you struggle to remember the also-rans.

A quiet year followed but he was back in the thick of the action in 2013 finishing third in the Masters as Scott became the first Aussie to win a Green Jacket.

He was tied for second alongside Mickelson as Justin Rose triumphed in the US Open at Merion and a respectable tie for eighth at the US PGA where Jason Dufner was the main man at Oak Hill.

Day kick-started 2014 with a win at the WGC-Accenture Match Play and made it clear he had his sights set on the Majors.

However, a thumb injury hampered his Masters prep and despite a tied fourth at the US Open, it would be another year of ifs, buts and maybes.

Day once again showed his heart and fighting spirit at the 2015 US Open when despite being barely able to stand due to vertigo, he still managed a top 10 finish.

A few weeks later at the Open Championships he had a putt on the 72nd hole to enter a play-off. He found the perfect line but left it short.

The look on his face said it all - he knew it was another chance gone. He finished in a tie for fourth alongside Jordan Spieth.

And it would be Spieth who posed the greatest threat at Whistling Straits but Day, on this occasion was in a league of his own.

Heading into the final round with a two-shot lead, Day continued to attack and make birdies. He didn’t defend his lead, he looked to build on it where possible.

Fortune favours the brave, and brave Day certainly is, but his overdue Major victory owed nothing to fortune.

Day may have been knocking on the door for a while but he smashed it wide open on the banks of Lake Michigan and and will surely give Spieth and McIlroy a run for their money over the coming years.

Sky Sports commentator Ewen Murray couldn't have put it much better: "If anyone deserves to be a Major Champion, it's Jason Day."