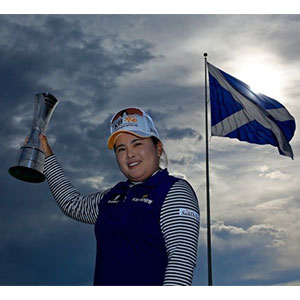 Inbee Park completed the career Grand Slam thanks to a brilliant final-round 65 at Turnberry.

The South Korean had won five of the previous 13 Majors and ticked off the British one after overcoming her compatriot Jin-Young Ko who led by four after an eagle at the 7th.

Park birdied four on the spin from the 7th, added an eagle at 14 and a seventh birdie at the 16th.

She now needs the Evian to complete the Super Slam with the French Major only having been granted its elevated status in 2013 – she also won that the previous year.

"This is the greatest day of my life yet for sure,” Park said.

"The Grand Slam has been the goal of my career, and I’ve achieved it at the age of 27. So I don’t know what the next goal will be, but I’ve got to set some kind of goal.

"Just seemed so far and so hard that I couldn’t achieve the Grand Slam, and I’m here and I’ve finally done it.”