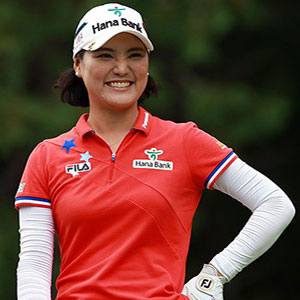 Park held the lead going into the final round but was happy for her best friend to take the title.

"It was really just the putting that was the only problem and So Yeon played well.

“She played really well and I’m really happy for her.

"If I didn’t win, I kind of hoped that she would win, so it’s kind of good that my best friend won the tournament and I’m ready to congratulate her.”

The 2011 US Open champion, had began the day a stroke behind Park, but was three behind the defending champion after seven holes.

Ryu then hit back with three birdies in four holes at the ninth, 11th and 12th to take the lead, and with Park unable to respond, she took the victory.

"I didn’t expect that I had a chance to win this tournament, because in the second and first rounds, I didn’t play really well,” Ryu said.

“Fortunately I was able to shoot eight under in the third round so after that I was in contention.

This win improves upon Ryu's third place finish in her debut appearance at Mission Hills last year, but will be seen as an opportunity lost by the current World Number Two Park, having held the lead coming into the final round.

With Ryu commenting: "She is not number one right now, but I believe she is the true number one, so it was great to compete with her.”

With Lydia Ko choosing not to appear in this event, this was a great opportunity to gain valuable ranking points, but Park slipped with bogeys at key holes in her final round to allow her compatriot to steal a lead and eventually the title.

Ryu and Park retained their team event title by a 15 shot margin over Norwegians and Suzann Pettersen Marianne Skarpnord.