Is the 17th at Sawgrass one of the greatest Par-3s in golf? 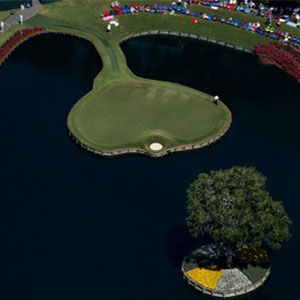 As we build up to The Players Championship on the Stadium Course at TPC Sawgrass this week , writers from National Club Golfer debate whether the infamous 17th is one of the greatest par-3s in golf.

Johnny Miller summed the 17th up as well as anyone when he said: “Every course needs a hole that puckers your rear end.”

I’m struggling to think of any hole that does that more.

At the Road Hole at St Andrews there is a fairly straightforward opportunity to make a five, at Augusta there is always a better side to miss. Here there is no opt-out shot, nor should there be with a 9 iron or a wedge.

I’ve been lucky enough to play the Stadium Course and much of my month-long mental build-up revolved around playing just one shot. There were relatively few nerves on the 1st tee.

The course got the better of me pretty much throughout the whole experience but my day, and indeed entire stay, would revolve around being able to fashion a short iron to a reasonably sized target.

My ball was struck well (thin) and rebounded off the bleachers and into a very well-visited watery grave.

Even the greats of the game admit that the usual ‘one shot at a time’ practice goes out of the window at Sawgrass.

Adam Scott has admitted to being unable to stop himself having a peak at the green from halfway down the previous hole.

“It is like having a 3 o’clock appointment for a root canal,” he said. “You’re thinking about it all morning and you feel bad all day. You kind of know sooner or later you’ve got to get to it.”

What it lacks in subtlety it more than makes up for in drama.


NO - says Dan Murphy, it’s a one-trick pony not an example of design genius

The 17th at Sawgrass has got a lot to answer for. It’s spawned any number of replicas around the world and helped inculcate the world’s golfers into believing that water is the ultimate hazard.

It only came about by mistake – Pete Dye was transforming an unpromising piece of Florida swampland by scooping out water hazards.

The earth had to go somewhere and when his wife, Alice, saw a mound developing in the middle of what would become a lake she suggested putting a green there.

Even Dye is frustrated by being defined by this one hole:

“People have the idea that I’m in love with island greens,” he said. “I’ve designed two in 50 years. Once you’re stereotyped, it’s impossible to lose it.”

The 17th is a party trick; the designer’s equivalent of a cheeky back heel.

When I think of the world’s great short holes, I want modest length, subtlety, drama, clever angles and, above all, the chance of redemption.

The 17th scores well on just two of those counts. It’s all-or- nothing, which is good in some ways but makes recovery impossible. Miss the green and the best you can do is a four.

Whereas at the Postage Stamp (Royal Troon’s 8th), for example, you can still save par with a brilliant bunker shot. You can also take six if it’s in a bad spot and you make it worse with a poor decision or execution of the second shot.

The 17th works because it’s the penultimate hole of a brilliant event; it’s also flawed, as Tiger Woods has often said, by coming so near the end. It can render someone’s efforts for 70 holes useless because of a gust of wind.

It’s an exciting hole. It’s great fun to watch. It’s instantly recognisable. But it isn’t one of the best par 3s in golf.