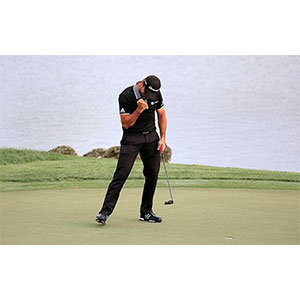 The new World No 2 posted his first win of 2016 with a brilliant finish at Bay Hill. Day showed his class with a spectacular two at the 17th and then produced an even more impressive up and down from sand at the last.

He stuttered early on with bogeys at the two front-nine par 5s having chipped in at the 2nd. But the birdie of the day, stone dead from the rough, closed out the front half and his two-under back nine gave him a 70 as his closest challengers struggled with the famous 18th.

Kevin Chappell teed off on the last with a one-shot lead after birdies at 13 and 16 but, having missed the fairway, he was unable to salvage his par. Troy Merritt, who tied for third with Henrik Stenson, had the most extraordinary Sunday.

The American had two doubles going out to look out of contention but then birdied the first five holes coming home, the fifth from sand. Another chip-in came at the 17th, this time for par, but a weak approach to the 72nd hole ended up wet.

Stenson also looked primed to end his winless run after back-to-back birdies at 12 and 13 but he gave those shots back within the next three holes.

The round of the day came from Kiradech Aphibarnrat whose 65 moved him up into a very profitable share of sixth.

Day said, “My iron play was very, very poor over the weekend but one thing that helped a lot was my short game. I holed a lot of shots out this week, more so than I've ever done in my career and it's all that hard work that I've been putting in from the start of the season on my short game because I know that that's one strength that I hold.