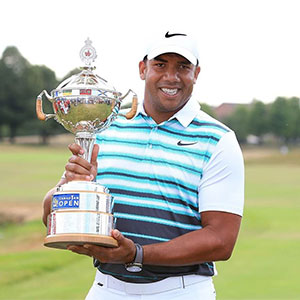 Jhonattan Vegas shot a 12-under 276 at the RBC Canadian Open at Glen Abbey Golf Club to clinch his second career PGA Tour victory.

Vegas ended the tournament with three consecutive birdies to tally a final-round 64.

There were a few players looking to join the Venezuelan on -12, including US Open champion Dustin Johnson but the American was unable to eagle to par-5 18th.

Johnson finished one-shot back in a tie for second with fellow American John Rahm and Scotland’s Martin Laird.

The win qualifies Vegas to compete at the PGA Championship this week.

“Great players that I mean, I knew if I got lucky, it was going to be a playoff. Super surprised when I saw that, you know, nobody got to 12.

“That's the fortunate breaks that sometimes you need to be a champion on the PGA Tour.

“It's a great feeling. I mean, last week, I had a six-shot lead going into the weekend and lost by three. I was five back starting today and won by one. It's a crazy sport. You've just got to keep your head down and play hard at every shot.”

The 31-year-old used an entire bag of Nike equipment, including a Nike RZN Tour Platinum ball, to finish with 23 birdies, tied for the most in the entire field.

Vegas averaged 323.5 yards off the tee and consistently found the green, finishing second overall in strokes gained from tee to green, with his Nike Vapor Pro irons and Nike Engage wedges.