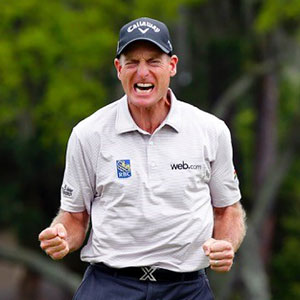 Jim Furyk ended "four years of frustration" after recording his first PGA Tour victory since 2010, winning via a playoff at the RBC Heritage in South Carolina.

Furyk, a two-time winner of the tournament, had to fend off a title challenge from fellow American Kevin Kisner who had forced the playoff.

Kisner had made birdie at the final hole to force the playoff with the the former US Open winner, Furyk, who recorded a final round eight-under par (63).

"I didn't hit it well for the first five holes today, in fact I drove it awfully," said Furyk. "I kept bouncing off trees and getting up the fairway.

“So I had a feeling that today was the day.”

With 11 birdies in 20 holes, the 44-year old took the lead into the clubhouse before Kisner forced the issue.

"I was on course on 14, and I knew if I could get through 14 and birdie two of the last four I could win the golf tournament.

“I made good efforts and good attempts at 17 and 18 but I wasn't able to birdie them and I had a feeling - I played with Kevin yesterday and when he needed to hit a good shot he always did.

"I kind of had a feeling he would birdie the last.”

Furyk said: "That was four and a half years of frustration right there."

Jordan Spieth was unable to challenge on the final day despite cruising to the title in Augusta a week ago.

"It was interesting, it was a weird event but all-in-all what a great four-week stretch," said the 21-year old.

Spieth hadn't finished lower than second since winning the Valspar Championship in March.

"Just looking back on the previous four weeks it has been incredible," said Spieth.

"I'm now looking forward to a bit of rest."

Spieth is expected to return to action at the WGC Cadillac Match Play in two weeks time.