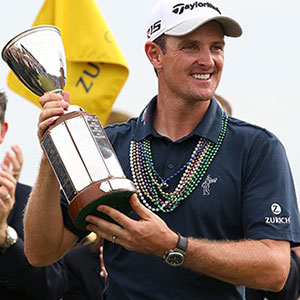 The Zurich Ambassador, who finished one shot ahead of Cameron Tringale now has a win in each of his previous five years on the PGA Tour.

The 34-year old’s 22-under par was enough to take the title one-shot ahead of the American, as the Masters runner-up continued from where he left off at Augusta.

"To get to 23-under par, I felt that that would obviously be the winning number but (the 18th) was an important birdie," said Rose.

"I had two short birdie putts on 11 and 12, and if you don't birdie that short par-4 I felt like I'd be leaking some oil at that point.

"It was a very important momentum keeper.

Rose took the outright lead on the par-3 17th after an aggressive tee shot saw him putting from within 5 yards of the hole.

"I had to bully myself to be aggressive there," said Rose. "It would have been very easy to have bailed out to the right half of the green.

"It was a perfect number for a 5-iron, I had 213 to the pin. It was a great number for me to hit a nice aggressive shot.

"The putt was a cup outside left and I just poured it in."

"It was a beautiful putt.

"It's an event that I've played many times,' said the 34-year old. "I feel like year-on-year I've been getting closer and I always joke with the Zurich guys that this is my 'fifth Major'.

"Any win is sweet, but when you get to share it with people you play with is fantastic."

Rose cited that his winning philosophy for the week had come from an unlikely source, in form of NBA Star Steph Curry.

"Maybe yesterday or the day before I started off hot, went cold and the Fulch said - come on remember Steph Curry.

"He went cold but he kept wanting the ball and he kept shooting threes and believing.

"So that was our mentality and as soon as he said that I had about a 12-footer and I kept visualising it going in.

"Today again we used that analogy and that's what great athletes you look up to do in the big moments - they want the ball and they make big shots and putts."

"To be one back after it's all said and done, obviously it's disappointing to not have a putt at it, but it's a great week," said Tringale.