Line-up of the UK’s biggest hitters confirmed for 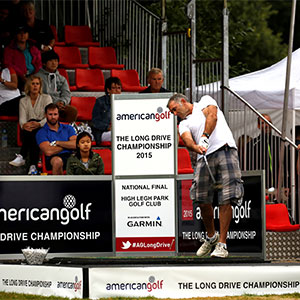 37 of the U.K.’s biggest hitters are flexing their golfing muscles, ready for the final of the American Golf Long Drive Championships on Friday August 19th at High Legh Golf Club, Cheshire.

From over 1000 contestants across Open, Over 45 and Ladies categories, the final 37 have made it through local and regional qualifying to battle it out for the prestigious title of American Golf Long Drive Champion along with automatic qualification for the World Long Drive Finals in October.

Competition is expected to be fierce at the U.K.’s premier Long Drive Final as the country’s best undiscovered talent takes to the big stage, as Daniel Gathercole, Director of Marketing and Communications at American Golf explains, “Last year’s event uncovered some incredible talent with Rebecca McGinley, our first Ladies Champion, now ranked third in the world. The distances we’ve seen at regional qualifying are way in excess of last year so we’re expecting the final to produce even more fireworks and hopefully someone who can match or even better Rebecca’s achievements.”

Seven of the qualifiers for the final have recorded distances in excess of last year’s winning drive so returning champion, Long Drive professional Dan Konyk, will have to be on his best form to stand a chance of retaining his title. With a ticket to the World Finals and a year as ambassador for American Golf and Garmin on the line Konyk is working hard to meet the challenge of this year’s event. “The guys at regional qualifying have been hitting some really big numbers so I know I’ll have to be at my best to compete,” commented the Huddersfield golf pro. “I’ve had a fantastic year as champion doing promotional work and video tips for American Golf as well as representing them and Garmin at the World Championships. I’m working hard to get up to my best form so I can stand a chance of having another year as Champion.”