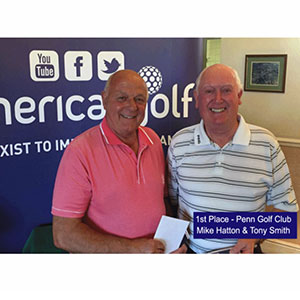 American Golf is delighted to confirm the first wave of competitors for its National Grand Finals weekend with the completion of its Senior Championship qualifiers. By the time finals weekend arrives over 2,500 American Golf Club members will have taken part in the company’s 2016 events.

Hundreds of competitors took part in the Pairs better ball stableford competition over four, 18 hole qualifiers. Three teams from each event qualified for the National Finals, which will be held at Ryder Cup venue, The Belfry, on 9th & 10th September.

Each qualifier was hotly contested with 4 points the maximum difference across the top three qualifiers at each event. The Midlands qualifier at Penn Golf Club was especially tight with Mike Hatton and Tony Smith edging 1 point ahead of the second and third qualifying pairs.

The Welsh qualifier at Pontnewydd Golf Club provided the first all-female team. Hannah Harris and Pauline Smith battled appalling conditions to bag the third coveted qualifying position. After 9 holes the Gwent course disappeared under water and the event was called with half way scores counting. The final qualifier at Rustington brought back last year’s American Golf 9 Hole Championship finalists Martin Derrick and Andy Gilbert, qualifying with an impressive 49 points, proving their ability to perform under pressure over the longer format.

The Senior finalists will return to action at the Belfry over the weekend of 9th & 10th September along with qualifiers from the American Golf 9 Hole Championship and Ladies Championship. This festival of golf will be the culmination of one of the most ambitious competition series undertaken in Europe, underlining American Golf’s commitment to driving participation in the game.


Qualifiers for the American Golf Senior Championship Qualifiers are: