Lucas Bjerregaard came into the week in 114th spot on the Race to Dubai and facing a jittery end of season. The Dane now has his first win after putting together an eight-birdie 65 to finish four clear of Marc Warren.

He was just one clear of George Coetzee and Graeme Storm at the turn but then continued to make strides with back-to-back birdies at 10 and 11. Over the course of the week the 26-year-old had 24 birdies and an eagle.

Storm and fellow Englishman Eddie Pepperell tied for third with local favourites Ricardo Gouveia and José-Filipe Lima a shot further back. Coetzee hadn’t dropped a shot all day but then trebled the 72nd hole to drop down into a tie for 7th.

“It’s been a terrible year so far for me, so I knew I needed a couple of good weeks to keep my card. I feel like I went out there and took it a bit more, where maybe before, I think I hoped that someone would kind of hand it to me or kind of fall in front of me,” he said. 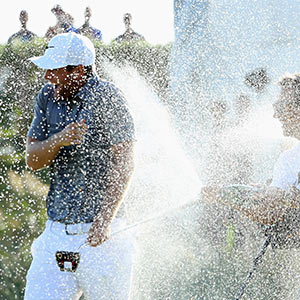 Marc Warren came into the week in 173rd spot on the money list after a dismal run of form. Since Wentworth his finishes have been MC-MC-WD-MC-MC-MC-MC-MC-33-14-MC-MC and 59. His second place here, helped by an eagle at 17, moves him up to 100th place and into a much healthier position.

Eddie Pepperell is your Tour form horse after three top fives on the trot following his 5th (Czech), 3rd (Netherlands) and here. His season was looking very different coming into September but he is now in 54th spot and in with a good shout of making it to Dubai.

Six Walker Cup players from Los Angeles were in the field in Portugal and it was all looking promising after the opening round for some much-needed earnings. But only Connor Syme made it through to the weekend and four impressive rounds in the 60s gave him a tie for 12th. David Boote (67-73), Scott Gregory (68-72), Jack Singh Brar (67-73), Alfie Plant (74-74) and Jack Davidson (72-76) all had the weekend to work on their games.