Rory McIlroy and JP Fitzgerald have parted ways after nine years and four major championships together.

Was “McIlroy sacks caddie” a headline you expected to wake up to on Monday? For many it was.

A report from Reuters says McIlroy will announce the split ahead of the this week’s WGC-Bridgestone Invitational.

McIlroy and Fitzgerald had been together for nine years after teaming up shortly after the Northern Irishman turned professional.

Following the Open, NCG editor Dan Murphy wrote that it was time for McIlroy to seek new blood on the bag. 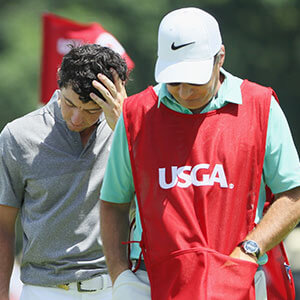 Just last week, McIlroy thanked Fitzgerald for a “great job” and for “jolting [him] into gear” after a poor start at Royal Birkdale. That would prove to be his swansong as McIlroy’s bagman.

After a 1-over 71 in the opening round, McIlroy, the 2014 Open champion, recovered and went on to briefly flirt with a title push. He finished in a tie for 4th.

Last month, Forbes listed McIlroy in sixth place on their latest list of highest-earning sports stars, with a wealth of $50 million, $16m of which is made up of earnings, and $34m endorsements. Forbes estimate that Fitzgerald made $1.65m from his cut of McIlroy’s prize money over the 12 months to June this year.

The news follows last month’s surprise announcement that Phil Mickelson and Jim ‘Bones’ Mackay had gone their separate ways after 25 years together. Mackay is now an announcer for the Golf Channel while Mickelson’s brother Tim has taken up bag duties for the five-time major champion.

It is not yet known who will replace Fitzgerald on McIlroy’s bag.