No form and four shots back – Fitzpatrick makes history

Matt Fitzpatrick has done next to nothing this summer but he is now the youngest Englishman to win four times on the European Tour. Here’s Matt Fitzpatrick’s form since finishing second in Sweden in June – 35-MC-52-MC-44-50-MC-54 – and now a W.

Last week, after the Czech Masters, he tweeted: “Unfortunately another poor one for me, lots of work to be done to turn it around.”

Whatever work Fitzpatrick, who only turned 23 last week, did it certainly worked at the European Masters at Crans-sur-Sierre. He closed with a 64 and then, on the third play-off hole, he saw off Scott Hend. The Aussie also missed out 12 months ago to Alex Noren, the Swede boxing a 30-footer at the first extra hole.

This time around Fitzpatrick had to make a five-footer to stay in it at the first extra hole, Hend then missed from a similar distance before, after finding a fairway bunker again, he made a messy bogey.

For Fitzpatrick, who played the 18th hole five times on Sunday and parred it each time, it was his fourth win. This makes him the youngest Englishman to win four times on the European Tour, some stat to have on your CV, and is perfect timing given the Ryder Cup qualifying is now underway. 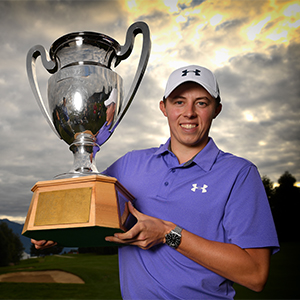 He did it courtesy of a final-round 64 which even included a pair of bogeys.

“It was a great final round. It was the lowest round of the week for me and it’s probably my lowest round in competition here.”

Not quite true, Matthew. Last year he closed with a 64 and he also managed it on the Saturday in 2015 when he was 7th and 2nd – numbers which makes his 25-1 starting piece seem quite tasty despite the poor recent form.

“I love this course. It’s fantastic. It really suits my game. Scott hit it to five or six feet and I was saying to my caddie that the bogey on 17 in regulation will cost me the win. Unfortunately for Scott, he gave it away. I was fortunate to get the job done. I thought it was over when he hit it close.”

The wins have come at home (British Masters), in Sweden (Nordea Masters), in Dubai (World Tour Championship) and now the mountains. At the start of the week he appeared to be heading out of the all-important world’s top 50, now he is safely inside that number.