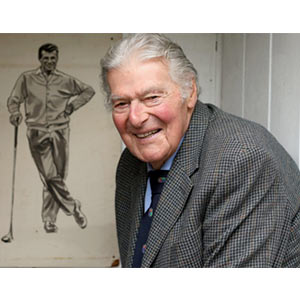 John Jacobs sadly passed away last week at the age of 91. He played – so well that he won twice and represented GB&I in the Ryder Cup – he captained the team twice, including the first time Europe joined ranks in 1979, and he created the European Tour. Up until 1971 tour pros belonged to the British PGA, Jacobs then spearheaded a split that set up an organisation which acted just for the tour pros. And so the European Tour was born.

But all of these will pale into relative insignificance as he will be remembered for his coaching above everything else. He could have played in the Masters but he had too full a lesson book to travel to Georgia. Anyone who has played the game for any length of time will probably have a book by Jacobs. His philosophies were based on ball flight, clubface alignment and swing path and he was said to be the only coach Jose Maria Olazabal ever really trusted.

And Jacobs had the common touch. He recognised that golf was expensive so pushed for the expansion of driving ranges.

There will, hopefully, be hundreds of brilliant anecdotes about Jacobs in the coming days but here’s a beauty from an interview with Golf Digest in 2010 and should give you something to work on this week…

“After Hogan and beginning with Nicklaus, good players gravitated toward a more upright swing, thinking this was progress. But it led to more players than ever taking the club back too straight, with the corresponding compensation of excessively driving the legs. This dropped the club underneath the correct downswing plane, causing a massive push-fade off the tee (or sometimes big hooks) and poor contact from the fairway. I called it rocking and blocking, and after the 1971 U.S. Walker Cup team couldn’t handle the tight lies at St. Andrews, The American Disease.

“The most helpful fixes for rocking and blocking are standing taller to the ball and making sure the clubhead is neutral to slightly open at address. Both take the steepness out of the backswing and encourage the correct rotary motion. So does hitting shots with the ball above the feet, as well as hitting drivers off the ground, where good contact is impossible if the path is too inside.”