Spieth back at Augusta.. and birdies 12th hole… twice 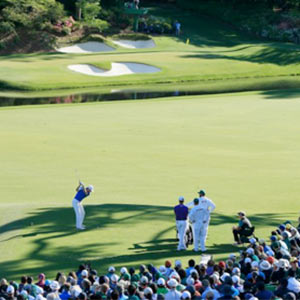 It might not have been the final round of the Masters but Jordan Spieth has been back to Augusta National, has played the 12th hole (twice) and birdied it both times.

Each December the 2015 champion goes back to Georgia with friends and sponsors and, needless to say after his quadruple-bogey seven there in April when leading the Masters by a country mile, there was some added interest when Spieth climbed aboard the tee at Golden Bell.

“Guys, we have some demons to get rid of here, I’d appreciate if y’all stood to the side of the tee box while I do my work here. That was cool.”

And, instead of the pair of water balls that helped let in Danny Willett, he hit an 8-iron to 15 feet.

“I was very nervous when I got on 12 tee. The greens were a little slower, and I left a lot of putts short,” the 23-year-old said. “I was pumped to hit the green, and then I hit my putt and it just about stopped short on the front lip and fell in for two. I probably gave like a big fist pump. I was walking around with my hands up, like ‘demon’s gone.’”

One of the first people he called afterwards was his trusty caddy, Mike Greller, to relay the good news. And there was more demon bashing the following morning when he almost stuffed it in the hole.

“I hit a 9-iron this time to a left pin and it landed about three feet beyond the hole and it was really, really soft, and it sucked back and almost went in, right on the lip to about this far. So, I got two twos out of number 12 the first time back. Last two times I played the hole, I made birdie.”

Roll on April, and more questions about last April…