Levy has made a similar gamble to Masters champion Patrick Reed and it seems to be paying off.

The Frenchman has seriously boosted his chances of playing in front of a home crown at the Ryder Cup this autumn.

After landing his fifth European Tour win in Morocco, surely Thomas Bjorn will be tempted to throw him into the mix at Le Golf National if he doesn’t make the team automatically.

It may mean leaving out a more experienced name, but we’ve been told the local crowds are unlikely to have too much interest in the event without a Frenchman in the side.

And it seems a gamble made by Levy, similar to the one made by Masters champion Patrick Reed, is also paying off.

Levy used to have a club and ball deal with Titleist but became a free agent in terms of his clubs at the start of this year.

So, with free reign on what models to choose, like with Reed, we can see a mix of different brands and a few clubs which aren’t exactly new.

He uses the 2017 TaylorMade M2 driver which has been one of the best-performing models from our testing in recent years.

His hybrid is from Titleist’s 816 range which was launched in the summer of 2015 along with the 716 irons.

The rest of Levy’s irons are about five years old in the shape of the Titleist 714 MB blades.

He has a mixture of the Vokey SM6 and brand new SM7 wedges.

While is putter of choice is an Odyssey O-works #7 which is one of the most popular head shapes on tour.

Levy still has a ball deal with Titleist and favours the Pro V1x model.

“This feels so good,” he said. “I’m a little bit tired now because it was really tough today, but I did a really good job today. For me, I played an amazing game. I’m so happy to win this trophy.

“Like what I said from the start of the season, I need to improve my game,” Levy told the European Tour when asked about his Ryder Cup chances.

“I need to work a lot. I worked a lot the last two days, two weeks, and I won this trophy.

“So that’s helped me but step by step, it’s a good win but I need to go back to work because we can see we have a lot of good players in Europe. So, it will be tough to make it.” 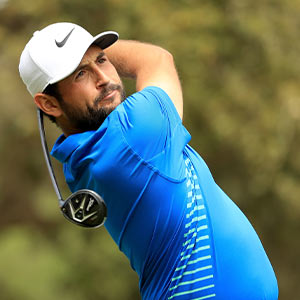