It was the M1 v the M2 driver in the final of the WGC Match Play. Dustin Johnson's M1 came out on top but see what else is in the world number one's bag.

No disrespect to TaylorMade but you get the feeling Dustin Johnson could pull a 10-year-old bag of clubs out of the garage and still win.

He’s definitely ‘on it’ at the moment and when in this form the rest of the field are struggling to keep up.

Johnson strengthened his position at the top of the Official World Golf Ranking with his fifth WGC title at the Match Play in Austin.

He saw off fellow TaylorMade staffer John Rahm in the final where it was the M1 driver v the M2 driver.

Johnson’s M1 came out on top.

We spoke to Johnson at the TaylorMade 2017 product launch in Florida in January and he explained how it’s the adjustability of the M1 which gives him the right spin, launch and fills him with confidence. 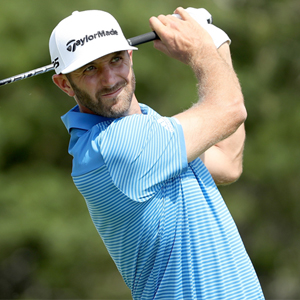 Johnson places one weight to the toe and one back allowing him to hit his high power fade off the tee.

He also has the high-launching 2017 M1 HL 3-wood set at 17 degrees with a slightly shorter shaft. Just the 280 carry with that…

We haven’t seen Johnson move into the new TaylorMade Tour Proto 770 or 750 irons in the same way Sergio Garcia and Justin Rose have.

He still relies on the 2014 TaylorMade Tour Preferred MB irons and a UDI utility 2-iron.

Johnson has been known to tinker his wedge set-up depending on the course, but for the start of 2017 he’s relied on the new TaylorMade Milled Grind wedges at 52 and 60 degrees.

His putter is essentially the same as Jason Day’s Spider putter but in a black version.