Check out the Titleist clubs which helped the Irishman to a stunning victory at Close House. Paul Dunne chipped in at the last using a Titleist Vokey SM6 wedge an sealed his first European Tour win in sensational style.

Dunne, who burst on to the scene as he led the 2015 Open Championship at St Andrews, has been a Titleist player throughout his amateur and professional career.

As well as a tidy wedge game, Dunne was also on form with his Scotty Cameron GoLo S2 putter with an average of 26 putts per round.

He managed seven birdies and an eagle during a thrilling final round where Rory McIlroy piled the pressure on with eight birdies of his own. 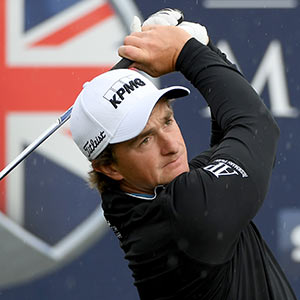 But needing two pars on 17 and 18 after McIlroy took the clubhouse lead on -17, Dunne closed it out with a couple of birdies – including the chip-in to win on 18.

The Titleist Pro V1x ball is Dunne’s favoured model and he opts for a classic look with the FootJoy DryJoys Tour shoes.

The victory moved Dunne into 12th place in the Race to Dubai rankings and was a final round that would have surely caught the eye of Ryder Cup captain Thomas Bjorn.