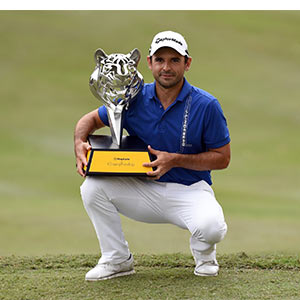 Two 63s were the story of the week. Bernd Wiesberger managed it on Friday, courtesy of nine straight birdies, and then Fabrizio Zanotti did it on Sunday, finishing birdie-eagle for victory in Malaysia.

The Paraguayan last won in 2014, his only success, and he pipped David Lipsky by a shot. Danny Willett was three clear overnight and expected to land his first title since the Masters last year but he produced the worst round, a 73, of anyone in the top 20.

Zanotti was six behind Willett and was still three back of Lipsky after 14 holes despite five birdies but he then picked up shots at 15 and 17 before his grandstand finish from 10 feet. This season he has previously missed all three cuts.

That left Lipsky needing two birdies to match him – he managed the first part but missed out on the last. Wiesberger finished third on 17 under, with France’s Alexander Levy another shot back. Willett tied for fifth.

“I think it was probably the best round of my career,” Zanetti said. “I think it was at the 15th where I thought I might be able to win, when I made birdie there. I thought, maybe I’ll have a chance if I make two more birdies, but I made a birdie and an eagle so it was great.

“To shoot 9 under on the last day to win is incredible. I have been working a lot with my coach and with my team and I’ve been making some changes. I missed the last three cuts but I was hitting the ball well and was not unhappy with the way I was hitting it. This week I just came here and tried to take it easy.”