True pro Poulter rolls back the years at Sawgrass

Weeks after losing his PGA Tour playing privileges, Ian Poulter was back where he likes it – in the spotlight – and contending for the Players Championship.

Say what you like about Ian Poulter but the man certainly has cojones.

Just a couple of weeks ago, his career was had reached a crossroads, if not quite a dead end. Without a win of any description since 2012, the 41-year-old had narrowly failed to take advantage of a medical extension following last year’s foot injury. He therefore had no PGA Tour card for the remainder of the season.

It was only thanks to another injured player in the same situation, Brian Gay – and specifically the tenacity of Gay’s wife Kimberley – that a discrepancy on how the points had been calculated for both men was identified.

The PGA Tour agreed. That’s the reason Poulter was able to take his position in the field for the so-called Fifth Major. 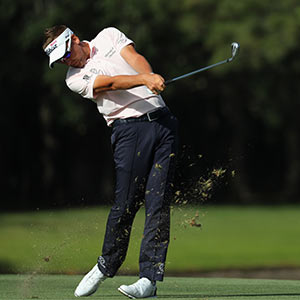 With its premium on accuracy from the tee and small, severely contoured greens, TPC Sawgrass is a great fit for Poulter. He was (a distant) second here as long ago as 2009, behind Henrik Stenson.

With his game in the best shape for some time, Hitchin’s finest knew this was an opportunity to relaunch his career. But there’s a big difference between that and what he actually produced over the past week.

You can only admire his resilience. There are not many players who would so obviously have relished the chance to put their game under the scrutiny of an event of this stature in the circumstances.

But Poulter? He absolutely loves it. It was the same for years in the Ryder Cup. Those bulging, popping eyes would virtually be propelled from their sockets. It culminated in six successive birdies in the Saturday fourballs to set up the 2012 Miracle at Medinah.

Playing alongside an uninspired Rory McIlroy, his heroics turned round their game against Jason Dufner and Zach Johnson. He arguably changed the direction of the match as a whole.

Since then, though, worryingly little. In 2014 at Gleneagles, Poulter was a shadow of his former self. He contributed just two half-points from his three games. Come Hazeltine, he was injured but may well have missed out anyway.

It is a curious fact that despite once reaching a career high of fifth in the world rankings, Poulter has never won a PGA Tour strokeplay event on American soil.

His two wins to date have come at the WGC-Match Play, in 2010, and the WGC-HSBC Champions in China, which was technically a European Tour event.

That’s quite an anomaly when you considering he has been playing more or less full time on the PGA Tour since 2005.

This is a record that leaves him some way short of world class, in individual stroke play at least. Yet he has never hidden away from the spotlight on or off the course.


From way right to extremely tight.

The ups and downs of golf for @IanJamesPoulter.


Without his legendary self-belief, he would simply be unable to compete at this level. So we shouldn’t have been surprised when he became the only man to keep a bogey off his card during a blustery Saturday at Sawgrass.

Poulter is as resilient as they come and a scrap is very much his style.

The resulting 71 left him in great shape heading into Sunday, especially given a leaderboard a little way short of vintage.

The likes of JB Holmes and Kyle Stanley fell away in the final round. But the Englishman stood firm.

One of the reasons for that is his cold pragmatism as a tour pro. Contrary to public perception, Poulter is no gambler on the golf course.

That was why we saw two back-nine lay-ups. One from from the tee on the drivable 12th and another when within range – albeit in the rough – of the green in two on the 16th. Poulter knows his limitations and plays within them.

After taking an expensive five at the 12th, for what would be the first of only two bogeys over the weekend. He finished by grinding out five straight pars and then somehow saving a bogey at the last when any score looked possible.

After a prime example of a Poulter shank, a shot golfing connoisseurs have become well-accustomed to over the years, he had to take a drop from a bush. Yet again though, he showed what he lacks in finesse he makes up for in courage. This latest shank could have cost him a place in the top 10 but the recovery, his fourth shot, blind from the pine needles, finished inches away.

Incredibly, Poulter only dropped three shots over the last 64 holes of the tournament.

When you take into account the nature of the golf course, let alone the circumstances, that is a remarkable statistic.

In the end, it wasn’t quite enough. Poulter took a cold-eyed look at the scenario and made his decision. It was enough to beat all except one man, the 21-year-old South Korean, Si Woo Kim.

So be it. Poulter leaves Ponte Vedra Beach a million dollars better off and with his career back on track.

He did what he had to do. He made Kim win the tournament – and he ensured he himself would win plenty of bucks regardless.

His performance was, above all else, professional. If we didn’t know it already then we do now.